When I opted to review this collection of short stories, I was drawn in by the subject. Global warming is an issue I skirt around the edges of, I hear of it often, but in all honesty, I am confused by it. And I think that goes for many other people. The general population rely on facts being given to us, but when scientists, governments and other authority figures have such disparity amongst them about what the facts actually are, and the interpretation of them, it’s no wonder so many choose not to believe global warming is happening, let alone to start to know what to do about it as an individual. There are so many conflicting schools of thought that I don’t know what to believe, and so I started to read this collection in the hope that it would enlighten me.

This collection is not an easy read. Each short story deals with the effects of global warming in a different year and in a different country, and each is crammed full of detail which can be a bit mind boggling. The author has clearly done a lot of in depth research and is keen to educate the reader as much as possible in the space of just a few pages. The pace is pretty fast at times and it feels as if there are vast amounts of information being thrown at you – but none of it feel unnecessary and it all serves to beautifully shape each story. 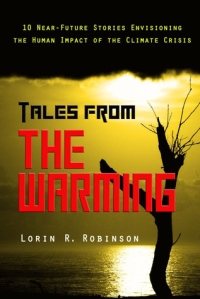 What most struck and saddened me whilst reading was how the for the majority of the characters, there is an easy acceptance. Like Robinson mentions in the introduction, the effects of global warming are slow moving and so we accept it as ‘the new normal’. Equally, I had half expected ten short stories filled with shocking Hollywood type drama, and I was pleasantly surprised by the breadth of this collection. The focus is not just catastrophe. Instead other, more indirect angles are covered; world and local politics, eco-activism, immigration and the scientific hunt for survival amongst them. I almost found this to be more shocking, as it made the events feel very real and relatable to the world we currently live in. No CGI, no special effects – just people like us, dealing with the world they inhabit.

Another element I found quite disturbing was the lack of a global community. The stories set throughout the book are in chronological order, and yet events in one seem to have no impact on another. It could just be that they are meant to be completely singular stand-alone stories – but I felt it spoke volumes of the author’s opinion on the current lack of unity regarding the issue.

Although it’s not a collection I would avidly return to time and time again, I did find Tales from the Warming very readable, educational and thought provoking. Although fiction, it is based on scientific facts and predictions. It frightens me that these events could become reality in my lifetime, and as a Mum of two young children I feel worried for the world they will grow up in. It has definitely made me much more aware.

Tales from The Warming is unique in the annals of climate fiction, a new literary genre spawned in the last decade by the climate crisis. The anthology of 10 short stories takes readers all over the world and over time to experience—in human terms—the growing impact of what the author has dubbed “The Warming,” the man-made catastrophe that is increasing the world’s temperature, raising ocean levels and causing increasingly violent weather.

The stories—powerful, prophetic and poignant—are thought exercises that blend fact and fiction to examine the human impact of the crisis. They are based on current worst-case scenarios proposed by climate science. Each concerns a different challenge thrust upon us by the warming. In them readers witness people’s struggles to deal with these new realities. Some of the stories put people in harm’s way; others focus more on human creativity in mitigating its effects.

Story locations range from Bangladesh to Venice, Los Angeles to Polynesia, South Sudan to Southwestern China, Mount Kilimanjaro to the Persian Gulf, Miami to Greenland. The time frame is 2022 to 2059, a period during which the world is beginning to suffer the far reaching effects of this civilization-changing phenomenon.

*I received an e-copy of the novel from Bookglow.net in exchange for an honest review.

One thought on “Tales from the Warming by Lorin R. Robinson”