‘Wow’ seems to be a wholly inadequate way to express how I feel about Sight, and yet it’s pretty much all I had for at least an hour after closing the back cover. The concept is so simple: a woman considering whether or not she wishes to be a mother, revisiting her childhood and her relationships with maternal figures in her life. Interwoven amongst her personal story, are accounts of major progresses made within medical history, each peeling back another layer as the mysteries of the human body are revealed through science. It is a novel about finding out who you are, right down to the very literal bones, and the effect is a wholly immersive internalisation.

We never know the name of the woman whose most private and innermost feelings the novels invades so deeply, and it is so fitting that this is the case. What is a name, but just another label? It neither defines nor explains us. The first person narrative tells us everything we need to know, everything of substance is right there on the page.

Which brings me straight into the language. Oh, the language is just sublime. I have rarely read a book which has entranced me to such an extreme. There are passages I have read and re-read, the depth of thought is inspirational and certainly had me considering completely new angles and perspectives for my own writing. Right from the very first page I was enraptured. It is intelligent and philosophical, and yet accessible too. I felt I was being spoken to as an equal, not spoken down to.

For me, a woman whose own road to motherhood has been a rough and pitted dirt track of doom, the concept of this novel sang to me. There was so much in it that I recognised from my own experience and that alone comforted me, giving me the sense of comradeship through the pages. It is so wonderfully assertive in its own honesty that I couldn’t fail to wonder at the author’s skill.

This is a beautifully written account of one woman in search for who she fundamentally is, reaching deep into herself to find out if she can be a mother to another person. It is not a rollercoaster ride of thrilling drama, it is simply not that kind of novel, and it neither needs nor warrants it as I was glued to this novel like I haven’t been glued to any other for quite some time. My copy is one I borrowed from the library, but when my bank balance has been boosted by Christmas gifts, I will be buying my own copy as I know this is a novel I will return to, and get lost in again and again. 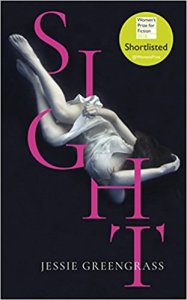 In Sight a woman recounts her progress to motherhood, while remembering the death of her own mother and the childhood summers she spent with her psychoanalyst grandmother. Woven among these personal recollections are significant events in medical history: Wihelm Rontgen’s discovery of the x-ray and his production of an image of his wife’s hand; Sigmund Freud’s development of psychoanalysis and the work that he did with his daughter, Anna; John Hunter’s attempts to set surgery on a scientific footing and his work, as a collaborator with his brother William and the artist Jan van Rymsdyk, on the anatomy of pregnant bodies.

Jessie Greengrass was born in 1982. She studied philosophy in Cambridge and London, where she now lives with her partner and child. An Account of the Decline of the Great Auk, According to One Who Saw It won the Edge Hill Short Story Prize and a Somerset Maugham Award, and was shortlisted for PFD/Sunday Times Young Writer of the Year Award. Sight is her first novel.

3 thoughts on “Sight by Jessie Greengrass”